Turn on suggestions
Auto-suggest helps you quickly narrow down your search results by suggesting possible matches as you type.
Showing results for
Search instead for
Did you mean:
HelpSign In
Options

Hello!
Somehow your the response to my initial post went to my junk mail back in March! That post has been locked, so starting a new one here. Bummer.
HISTORY
Bought 4 new Nest Protects in Jan/Feb from Costco. No problem with 3 but after only a month installed, 1 complained of low battery. After I did not receive a response to my initial post here (so I thought), I ordered a new set of Lithium batteries in late March 2021, assuming it was just a bad set of batteries that came with my unit and that maybe you did not want to replace the batteries for me.
With the new batteries, everything went well until early AM on August 18. This Nest Protect began chirping, telling it had low batteries. In the middle of the night, I could barely think straight so I just removed the batteries so we could sleep.
After looking at the app just now, I reinserted the batteries and it checks out OK. Based on previous experience in Feb/March, I assume it will determine these batteries are low again in the next couple days.  At this point, I do NOT think the batteries were the problem but instead there is either a bad sensor on this Nest Protect OR this Nest Protect has some other problem causing it to drain lithium batteries VERY quickly. Maybe this unit is bad? I have owned another Nest Protect since 2016 without a single battery problem and it's still going strong. So what's the deal with this one?
I will also answer your questions here (from your previous response) and include pics.
Is your Nest Protect wired or battery-powered? Battery ONLY, NOT wired.
What happens when a Safety Check is run? (a screenshot is needed) Once I reinserted the batteries, the Safety Check went fine. Again, I do not expect this to last long. (See attached screenshot of Safety Check before batteries reinserted.)
What error messages (if any) does the Nest app show? History of Error Messages shows the battery flagged low starting at 12:17AM, again at 2:51AM and twice more at 4:39AM & 4:59AM, all on August 18. I removed the batteries at 4:59AM. (See attached.)
Has the Protect chirped? Yes, as described above telling us the batteries are low.
Please send us a photo of the batteries you’re currently using so we could take a closer look. Included a photo of the original set of batteries that came with the Nest Protect (at left) and the replacement set we purchased in late March (at right).
NEXT STEPS
Please advise. The biggest reason I moved to Nest was because of the low maintenance, hassle free promise. The first Nest Protect I purchased in 2016 delivered on that promise but this one has not.
Sincerely,
Jason 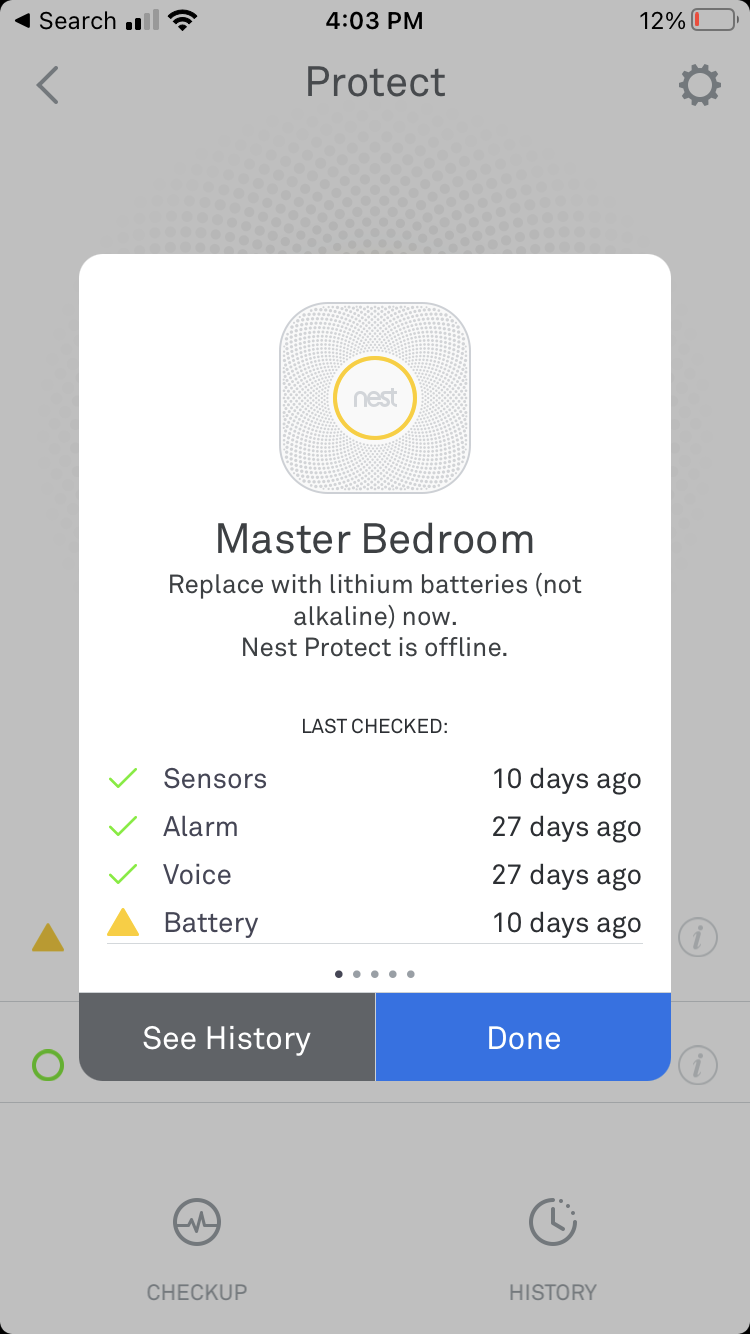 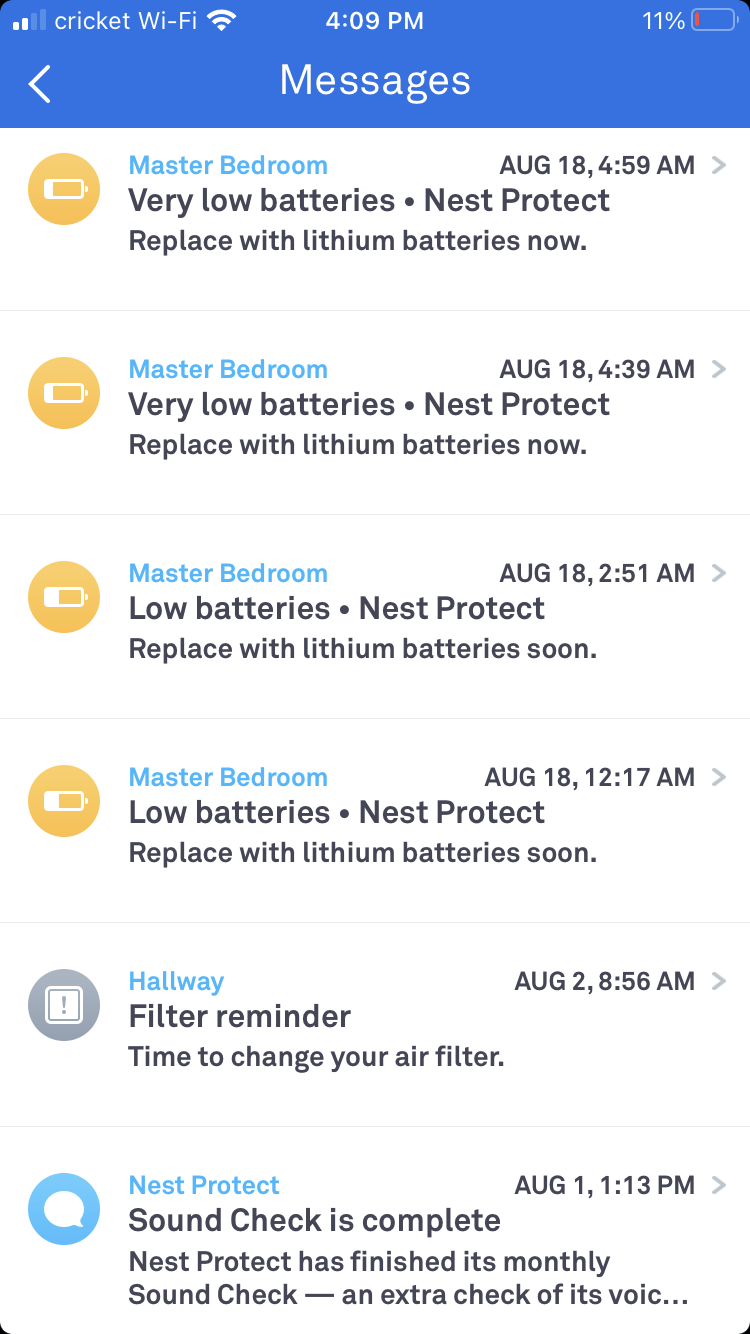 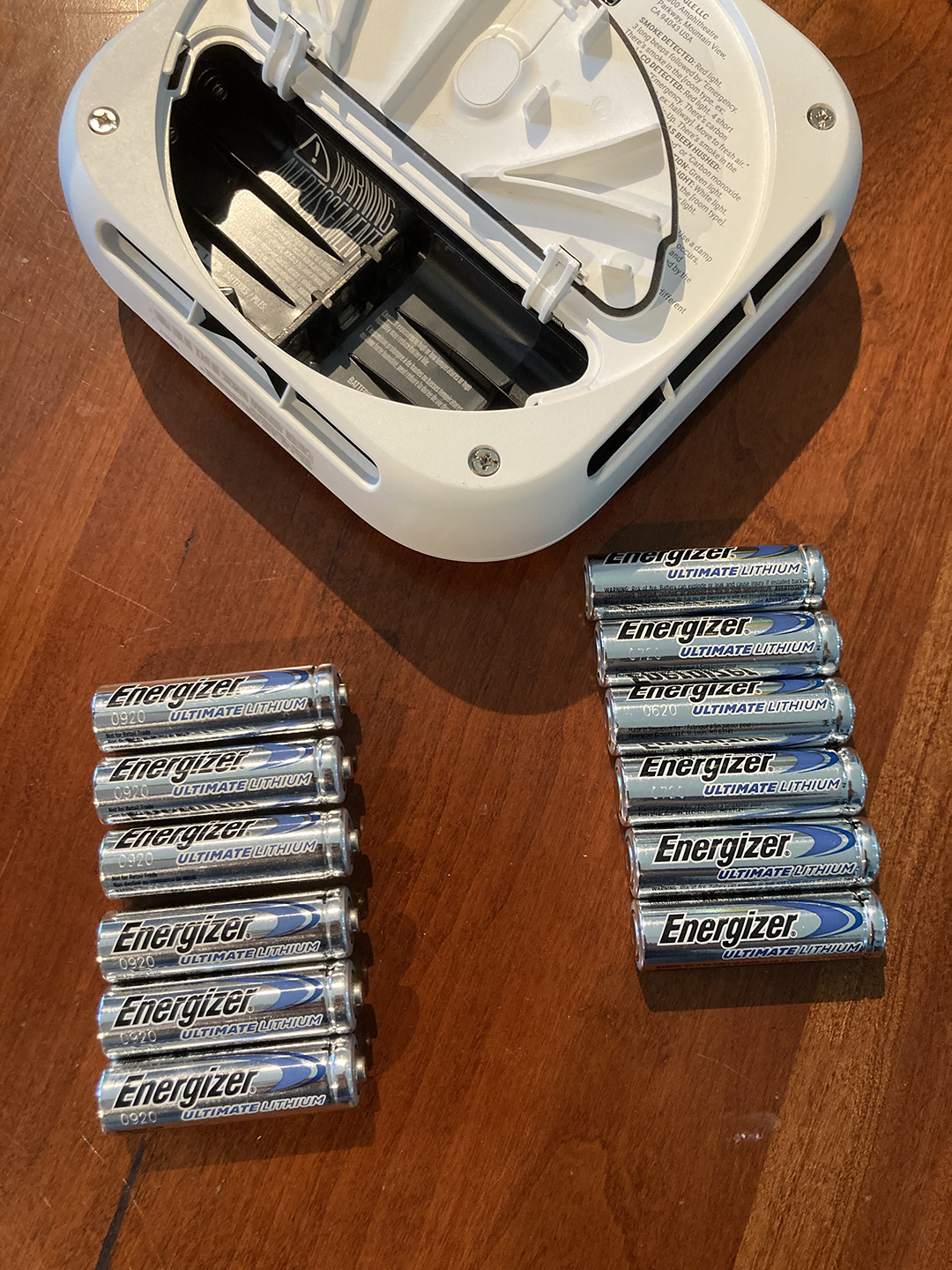 I have exactly the same problem with a Protect unit that was manufactured in 2015.  What is the solution please?

The issue is identical - I put new batteries into the unit and within a couple of weeks they are dead.  The date of manufacture may be different but the cause could be the same.  Over the air updates maybe.  Hence I am asking for help from Google, not from you.

Are you able to address my issue? Who/how do I connect with about this?

I too have this issue with one of my Nest protects. One I haven't needed to change the battery at all (with all settings on), the second I have to change every 2 months (night reminder and path light settings off). Replaced with same batteries it came with. Please help!!!

Same problem here. From a search of the threads it looks like this is a common issue, and the threads keep getting locked with the suggestion to use Energizer Lithium (with zero indication that was not being used). I've replaced the Nest Protect batteries (using Energizer Ultimate Lithium) at least 3 times this year so far. I was not expecting $20 upkeep in batteries every 3 months with this. Is there a known problem and solution?

That's all I can find also. People are using the correct batteries and Google / Nest keeps locking threads. To me this means it's a known or uknown problem and they refuse to address it. Nest has become trash to me.

Same issue for me. I have 2 Nest Protects for the past approx 4 years. 1 of them has just gone through 1 battery replacement. The other started draining batteries in about 2 to 3 months early this year. Now it is draining new sets in days.

I am having the same exact issue. I have used the proper batteries and one of my Nest Protects is chirping after just a few weeks. This is one I have had since 2016, was fine up until a few months ago when I changed the batteries for the first time after several years, and now this. Google, what is the issue??

I do have the exact same issue with one out of four units purchased in 2019. It got so bad that I now have that unit on a permanent USB power supply, which seems to work.
That whole picky thing about batteries is bollocks; it really doesn't matter if I throw Energizer or Duracells at it, that unit drains them in no time (to test, I put new Duracells in one of the other units, which is still using them trouble free).
The Energizers are relatively hard to get in Europe.

Is there a definite explanation for this phenomenon? Because I find a lot about this issue, but no technical explanation or solution.... 🙄

There is obviously a quality issue that is affecting some of these units that are 2 or 3 years old. I guess it's up to us if we want to buy a new replacement or move away from the Nest smoke detectors. I've chosen the latter.

They are too expensive to have this issue.

Same here. The batteries started draining a few months ago (around September of last year like a lot of people in this group). Never had a problem before that and mine was bought a little over two years ago, same as some of the responses here. Sounds like an update issue that is causing the batteries to drain. I'm also suspecting that the batteries are fine because I put new ones in yesterday that are showing up in the app as low today.

I have the same issue I have 2 products and 1 is always stating low batteries.  I'm fed up.  Are their other "smart" smoke detectors?

I have the same problem - was great for many years on the same set of batteries, now i have to change all the batteries EVERY month. it's so terrible (and expensive) that I have to stop using the smoke detector and look for another solution. maybe Google/Nest wants us to buy the wired model and not use the battery version.

Its absolutely so frustrating! It seems quite coincidental that soon after the last couple of updates, all of a sudden everyone is experiencing the same issue. Doesn't make sense...they figure most people will go out and buy a newer generation nest protect. BS, in my opinion.

did you get any news from Nest?

thanks for any follow up/ news you can provide.

I'm having the same issue. 1 Protect (out of four) is lacking as well. The battery runs out within a month. 😞

Any news from Nest? I would like to fix the problem if I knew what is causes it.

Thanks for reporting this issue. Hope Next can fix it.

same problem. i'd like to just replace with a wired version to avoid the battery problem all together. is there anyone from google support that can help with this? please contact me.

My batteries are draining too requiring replacement every month.  Google support - please share what you intend to do about this problem?

I have the same problem with a unit purchased in October 2021. Purchased two, 1 works fine, 1 drained two sets of batteries in two weeks. I'm shocked at the lack of response from Google on this thread/issue. Very damaging to the Nest brand. I planned on purchasing three Nest combo outdoor, wired sensor lights with cameras but will switch to a different brand based on this product and customer service experience .

I’m too experiencing the same issue..

1 of my protects is just eating these Energizer battery’s. (Every couple weeks its drained again…) My other nest works perfectly.

Google/Nest should step up and help us out… this is really annoying that we are all here with the exact same problem..

I just ended up getting rid of the faulty one and bought a cheap $30 detector that works great. No more Nests!

Same problem here with NEST PROTECT and low battery warning. Looks like it´s a massive problem that google needs to solve.
Batteries are batteries all are 1.5v so we can 't have a days vs years gap between brands...

Me too, same problem. I have two of them, the faulty one gives me notifications about low batteries after 3 weeks of new batteries. 😔

This is happening to me, too.  Multiple Nest protects.

In fact, my Nest Gen 3 learning thermostat battery is also out, and the unit refuses to hold a charge!

Sure, buying a new one will solve that, but I don't need support to tell me that.

Same here. One is fine and the other is every month. Looks like I started having the same problem at the same time as a lot of you due to an update.

just to give a heads up. I'm experiencing the same problem. But i've done a complete factory reset now 3 weeks ago (since my last post) and the protect is still up and running....

One of three Nest Protects reports (chirps) that batteries are low even when they are fresh. Going with Energizer Ultimate Lithium makes no difference. Google, this problem was reported years ago... and is still not fixed. Why? I will be calling tomorrow to return my Protects and go with a more reliable system. These units are WAY too expensive to be having this problem, and it's just a matter of time before a Class Action forms. Please wake up!

I have the exact problem too! I have 2 hard wired nests and just replaced all the batteries and TWO days later one is chirping saying the batteries are very low replace NOW…. Something has to be going wrong with an update or something surely! Has anyone actually had a response from Google/nest in relation to this?

No response from Google! I guess we just need to wait for this problem to happen to an attorney or hire one (class action). Aren’t there lemon laws out there?

Same here! And I just tested the supposely drained batteries, and batteries are still good.

I’m thinking to get a cheap smoke detector, and the Ring listener and never look back to Nest junk.

Factory resetting in 3,2,1… Let’s hope it will work.
Thanks!

I do have the same problem with my 3 next protect. I had changed batteries 4 times for the 3 of them.  What is Nest going to do about this?

I’m afraid you can add me to this list, I have 3 protects and need to change the energiser batteries every 2 months, and rechargeable ones don’t work! Any suggestions?

After days of Facebook messenger chats and email chats they have said ‘Sorry it’s out of warranty’ conveniently just out of the 2 year period… they are scammers, and these products obviously self destruct outside of warranty to make you buy another one. I’m reporting them to consumer affairs Australia. Oh and ‘Hi Google’ I’m sure you read all of this but nobody EVER has the guts to jump in! What a scam